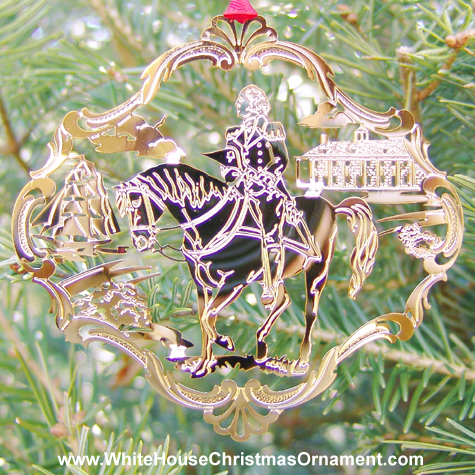 George Washington's contemporaries frequently commented on the general's horsemanship. According to Thomas Jefferson, Washington was "the best horseman of his age, and the most graceful figure that could be seen on horseback." The sight of Washington on horseback was a familiar one not only on the battlefield, but also at Mount Vernon. Whenever he was home tending his farms, Washington would set out immediately after breakfast to ride through his 8,000-acre plantation. The ride could take several hours and could run a circuit of nearly 20 miles while he visited each of his five farms for a daily inspection. This three-dimensional 24-karat gold-finished brass ornament shows Washington in uniform with the Mansion in the background. Another element to this ornament is a ship on the Potomac River. Ships carrying cargo to and from the nearby port city of Alexandria sailed past Mount Vernon regularly.