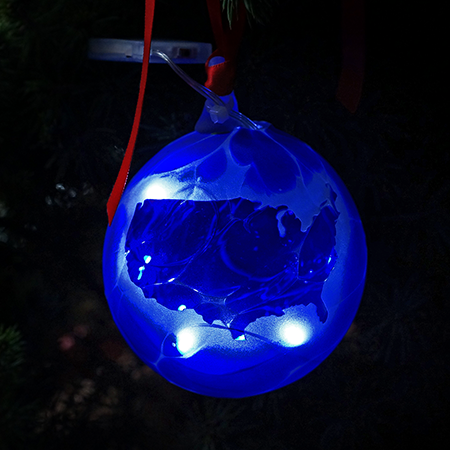 The American Union Spirit Glass LED Ornament honors the victory that preserved the nation created in 1776. Lincoln at Gettysburg described the war as the great "testing" whether a "government of the people, by the people, for the people" would survive or "perish from the earth." Since 1865 no disaffected state or region has seriously tried to secede. The United States of America has emerged as the world's largest economy and foremost democracy by the late 19th century.


This ornament is hand-made in the United States and can be displayed year-round either in your holiday tree, office, or garden and they make great gifts to history buffs. Our ornaments have been used to decorate holiday trees during Winter Balls, and Washingtonian Society and State Caucus events.


Own a moment of White House history. Each ornament is hand blown by a glass master to your order. No two are alike. Battery and lights can be replaced. Wholesale discounts for large event orders.


Proudly Made in the USA