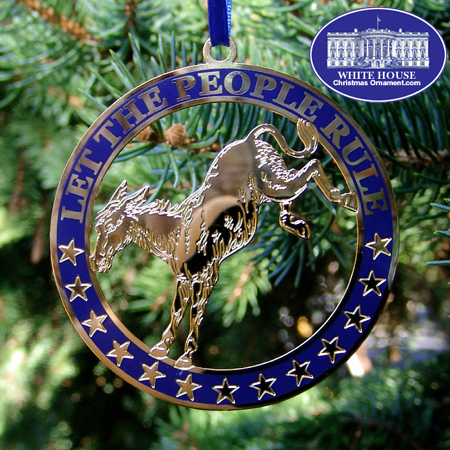 Thomas Jefferson gave the Democratic Party its being. Jefferson believed that the competent should rule, always subject to the suggestions and criticisms of the total public.

Andrew Jackson gave the Democratic Party its full meaning. Jackson was the practitioner of democratic government. He brought Jefferson's theory to life for the people. They participated. They understood. They were the government of the United States. Jackson challenged Adams again in 1828 and defeated him in a campaign which centered on Jackson's image as a man of the people battling aristocracy and corruption. Jackson easily defeated Henry Clay in 1832.

When Andrew Jackson ran for president in 1828, his opponents tried to label him a "jackass" for his populist views. Jackson, however, picked up on their name calling and turned it to his own advantage by using the donkey on his campaign posters. Jackson defeated Adams as a man of the people battling aristocracy and corruption.

During his presidency, the donkey was used to represent Jackson's stubbornness when he vetoed re-chartering the National Bank. The first time the donkey was used in a political cartoon to represent the Democratic party, it was again in conjunction with Jackson. In 1837 Jackson was retired, but he still thought of himself as the Democratic Party's leader and was shown trying to get the donkey to go where he wanted it to go. The cartoon was titled "A Modern Baalim (leader) and his Ass (working people).

In 1874 Harper's Weekly published a political cartoon illustrated by Thomas Nast titled "The Third Term Panic." The cartoon portrays animals representing various issues running away from a donkey wearing a lion's skin. The elephant (the symbol of the Republican Party for which Nast was also responsible) labeled "The Republican Vote," was about to run into a pit containing inflation, chaos, repudiation, etc. In this cartoon, artist Thomas Nast reacts to the distaste of Democratic uneasiness over the former President Ulysses S. Grant’s bid for an unprecedented third term. The tradition of serving no more than two terms, set by President George Washington, carried a strong stigma against anyone who attempted to violate it.

The 2005 Let the People Rule Christmas Ornament is sure to provide a festive reminder of the Democratic Party. You can display your Democrat sentiments on a desktop, mantle, or holiday decoration.