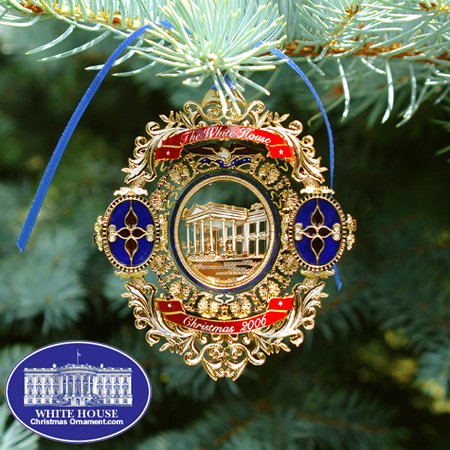 The 2006 White House Christmas Ornament honors Chester Alan Arthur (October 5, 1829 - November 18, 1886) was an American politician who served as the twenty-first President of the United States. Arthur was a member of the Republican Party and worked as a lawyer before becoming the 20th vice president under James Garfield. After Garfield was mortally wounded by Charles Guiteau on July 2, 1881, and died on September 19, Arthur became president, serving until March 3, 1885. "Old Chesty" as he was known, is notable for creating the Bureau of Labor Statistics in 1884.

The design of the 2006 ornament is inspired by President Arthur's insistence to redecorate the White House. He brought 24 wagon loads of furniture, some including pieces dating back to John Adams' term, carted away and sold at public auction, and Arthur commissioned Louis Comfort Tiffany to replace them with new pieces. A famous designer now best-known for his stained glass, Tiffany was among the foremost designers of the day.

The 2006 White House Christmas Ornament portrays an American bald eagle flying over the White House North Portico. Two blue, black, and white ovals flank the North Portico represent dogwood blossoms that Tiffany integrated into the red, white, and blue stained-glass screen, which was located in the Entrance Hall until the Charles McKim 1902 renovation. The gold-plated leaves that surround this stunning ornament originate from the hand-painted murals in the White House entrance hall.