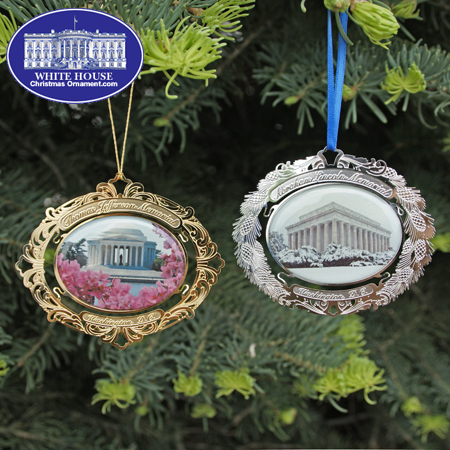 Save over 10% when you purchase these beautiful American-made ornaments featuring two of the most historical structures in our Nation's Capitol. The Lincoln Memorial is a United States Presidential memorial built to honor Abraham Lincoln. Completed in 1922, the memorial is located on the National Mall in Washington, D.C. The architect was Henry Bacon, and the sculptor was Daniel Chester French. The 36 columns required for the design were seen to represent the 25 U.S. states at the time of Lincoln's death plus the 11 seceded States.

The Jefferson Memorial, a circular domed building designed after the Pantheon in Rome, commemorates the contributions of Thomas Jefferson, third president and author of the Declaration of Independence.