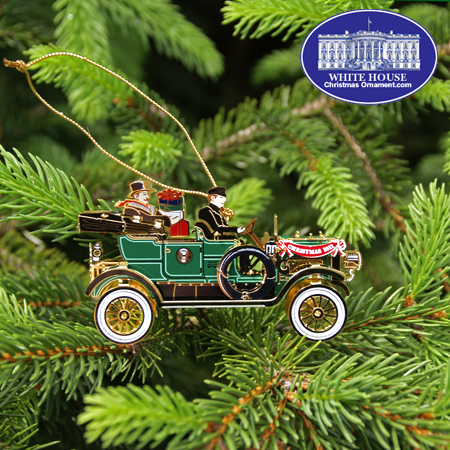 
The official 2012 White House William Taft ornament celebrates the administration of the twenty-seventh President of the United States and his love for ingenuity and manufacturing. The 2012 White House ornament depicts President Taft (September 15, 1857 - March 8, 1930) and his wife, Helen, in the first automobile used to transport any President. Introduced in 1909, the White Motor Company's Model M automobile replaced the traditional horse-drawn carriages that previously transported the President and his family.


President Taft and his wife are seated in the seven passenger car on their way to deliver Christmas presents. They are seated behind White House chauffeur George H. Robinson. The steam powered car was painted in a rich color of green and included the Great Seal of the United States on the doors.