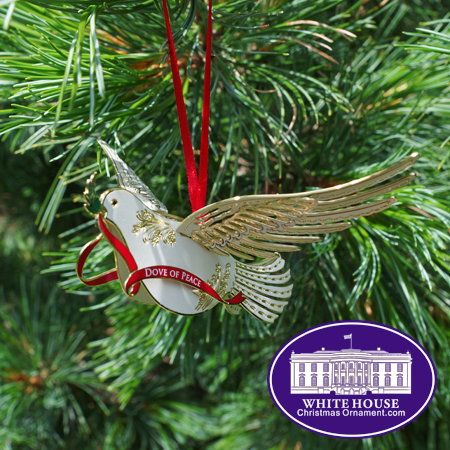 2015 Dove of Peace Christmas Ornament represents symbol that held a special meaning for President George Washington, who had won independence for the United States. President Washington did everything he could in the remainder of his lifetime to ensure America would endure in peace.


The dove ornament is three and a half inches from green olive branch to tail and three and a half inches tall with a four inch wingspan. The white dove with gold accents has hinged wings plus a red banner with "Mount Vernon" on one side and "Dove of Peace" on the other. Red ribbon for hanging and an educational enclosure card is included. This ornament is presented in a gift box with a colorful lenticular top which shows the dove moving and the words "Peace, with all the world is my sincere wish. G Washington".