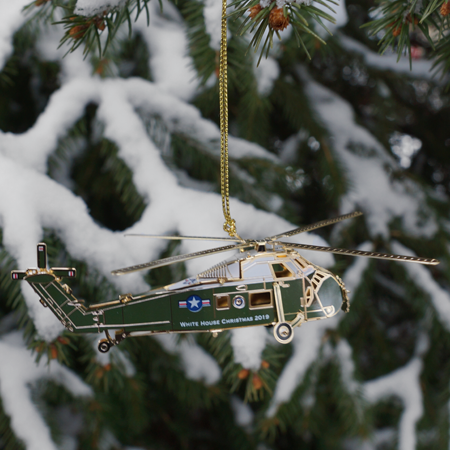 White House Christmas Ornament is proud offer in 2019 a tribute to President Dwight David Eisenhower for his distinguished military service and innovation in transportation system for officials and foreign dignitaries.

This year, Lockheed Martin became the first ever official sponsor of the White House Historical Association ornament. Sikorsky, a Lockheed Martin company, has built every presidential helicopter from the Eisenhower administration to the present day.

Dwight David Eisenhower was born on October 14, 1890 in the town of Denison Texas. His parents, David and Ida, were members of the River Brethren church in Abilene, Kansas, an off-shoot of the Mennonite faith based in Switzerland. Abilene was a well known as a major cow town. It was the northern point of the Chisholm Trail to drive cattle from Texas to Chisolms trading post located along the Kansas Pacific Railway . The cattle were loaded on train cars and transported for shipment to eastern markets.

You might have heard the song "The Old Chisholm Trail":

”Come along boys and listen to my tale, I'll tell you of my troubles on the old Chisholm Trail. Come a ti yi yippee, come a ti, yi, yea."

Like all the boys of the household, young Dwight was nicknamed by family and friends as “Little Ike,” an abréviation of his family name. Dwight answered to that name all of his life.

While attending Abilene High School in 1905, young Ike found himself entranced with plane geometry and loved to logically work out problems. Outside the classroom young Ike was fascinated with the probable outcomes of poker. He disdain the social scene, but was a leader in athletics.

After High School, young Ike worked for a short period with his father, at the Belle Springs Creamery, established by Mennonites.

According to Ben Kraybill, Ike nearly drowned while working as an ice puller at the creamery. The job required moving ice into the tanks of salt water used to keep the milk cold.

“One time, Dwight fell into a brine tank,” Kraybill says. “Christ Hoffman helped him out, and Ike joked later to Mr. Hoffman, ‘You should have pushed me under.’ ”

America is greatful Mr. Kraybill did not. Ike decided to leave the creamery and follow his childhood interest in the United States Armed Forces.

First, Ike imagined himself as an admiral, so he applied to the Naval Academy. Ike was rejected from the university do to his age, but that did not discourage him. Ike then took a military qualifications test and successfully was accepted into the the U.S. Military Academy at West Point, New York in June 1911. He graduated in June 1915. General Omar Bradley was his classmate. Prior to graduation, Ike wrote a brief portrait of Bradley in West Point's yearbook, Howitzer. Ever prescient, even at this early age, Eisenhower was of the opinion that Bradley's most "promising characteristic is 'getting there,' and if he keeps up the clip he's started, some of us will someday be bragging to our grandchildren that, "Sure, General Bradley was a classmate of mine.'"

In 1918, Ike was given command of Camp Colt, Pennsylvania, a post of the newly formed Tank Corps, National Army. He received a Distinguished Service Medal in 1924 for his performance in this assignment

In 1925, Ike was accepted to the Command and General Staff School (CGSS) at Fort Leavenworth, Kansas. He finished first in his class.

In 1935 Eisenhower served as the Supreme Commander of the Allied Forces in the Pacific. He was General Douglas MacArthur's assistant in Washington and his advisor in the Philippines in 1935. Ike admired General MacArthur's strategy, but considered him to have an overly large ego.

In 1941, Eisenhower had become the chief of staff of the Third Army. Ike was awarded the rank of brigadier general and was recognized as one of the top leaders in the Armed Forces.

In 1942, Army Chief of Staff George Catlett Marshall Jr. appointed Eisenhower to the War Plans Division in Washington. Ike helped organize the largest military expansion in U.S. history and prepared a strategy for an Allied invasion of Europe. Marshall was impressed with Ike's work and promoted him to Major General and Commander of all U.S. troops in the European theater of World War II. Ike's first mission was to head Operation Torch, the Allied invasion of French North Africa.

In 1944, the 5th Army commanded by Lieutenant General Mark Clark, captured Rome the first of three enemy Axis capitals. The banner headline in the first edition of Stars and Stripes, the American Army paper put out by soldier-correspondents, read, ''WE'RE IN ROME.'' Rome's capture had successfully distracted the Germans. During this stage of the war, Eisenhower was was appointed commander of Supreme Headquarters Allied Expeditionary Force (SHAEF) in England and gearing up for the D-Day invasion of Normandy France. The next day, Stars and Stripes printed a one-word headline referred not to Italy but to Normandy: ''INVASION.'' The Western Allies of World War II launched the largest amphibious invasion in recorded history when they assaulted Normandy. Here is an excerpt of General Eisenhower's Order.

"Soldiers, Sailors, and Airmen of the Allied Expeditionary Force!

You are about to embark upon the Great Crusade, toward which we have striven these many months. The eyes of the world are upon you. The hope and prayers of liberty-loving people everywhere march with you. In company with our brave Allies and brothers-in-arms on other Fronts, you will bring about the destruction of the German war machine, the elimination of Nazi tyranny over the oppressed peoples of Europe, and security for ourselves in a free world."

On May 7, 1945 Germany unconditionally surrendered to General Eisenhower. All Allied powers celebrated Victory in Europe together on 9 May 1945. Ike was given a hero’s welcome upon returning to the United States.

In May 1948 Ike left active duty as the most popular and respected soldier in the United States and became president of Columbia University in New York City. His book Crusade in Europe, published that fall, made him a wealthy man.

On September 7, 1957, President Dwight D. Eisenhower was vacationing at his summer home in Newport, Rhode Island, when his immediate presence was needed at the White House. The President was required at the White House to deal with the "Little Rock Nine" crisis stemming from Arkansas Gov. Orval Faubus ordering the Arkansas National Guard to block black students from attending Central High School. President Eisenhower responded by sending the 101st Airborne into Little Rock to enforce the Brown vs. Topeka Board of Education desegregation ruling handed down by the U.S. Supreme Court in May 1954.

Typically, the return trip to Washington, D.C., required an hour-long ferry ride across Narragansett Bay to Air Force One, followed by a 45-minute flight to Andrews Air Force Base, Maryland, and a 20-minute motorcade ride to the White House. Realizing the urgent need for his presence in Washington, President Eisenhower directed his staff to find a faster way to Air Force One.

An HMX-1, UH-34 helicopter was on Aquidneck Island in case of an emergency and could be used to fly the President to his awaiting aircraft. President Eisenhower approved the idea, and Col. Virgil D. Olson and his crew were ordered to rush to a landing pad at the Naval War College at Newport where the President and Mrs. Eisenhower were staying during their vacation. Col. Olson reported making the flight to the waiting Air Force One across Narragansett Bay in a 6-minute flight.

The 1st Helicopter Squadron (1 HS) is the United States Air Force's largest operational helicopter unit based at Andrews Air Force Base, Maryland. assigned to the 811th Operations Group of the 11th Wing. 1st Squadron's primary mission is to be prepared to evacuate high-ranking personnel from the Capital area in the event of a national emergency. It also supports Washington D.C. area airlift for high-ranking Executive Branch, dignitaries, military leaders and other VIPs. The squadron also supports search and rescue missions.

First squadron traces its helicopter heritage back to 1955, serving as the first Air Force rotary-wing squadron within the Washington, D.C. area.

Helicopter Flight at Andrews Air Force Base, Maryland. In July 1957, a helicopter from the 1st landed on the lawn of the White House to transport President Eisenhower, marking the unit's first presidential airlift flight.