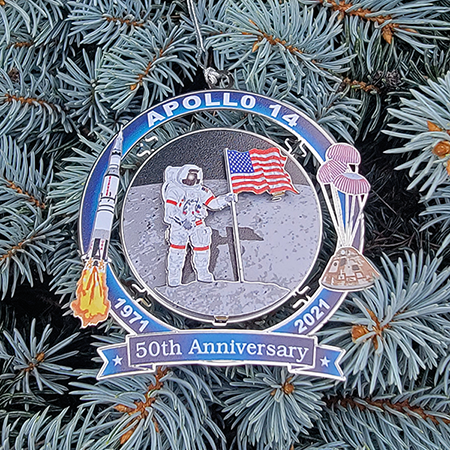 The top of the outer blue ring of the ornament states "APOLLO 14" To left the features the three stage Saturn V rocket used to launch astronauts Alan Shepard, Edgar Mitchell, and Stuart Roosa. astronauts to the moon. Just below is the mission date, "1971" in white numerals. To the right The Apollo 14 Command Module, nicknamed "Kitty Hawk," splashed down in the Pacific Ocean and can now be viewed at NASA Kennedy Space Center in Merritt Island, Florida. Just below is the anniversary date, "2021" in white numerals. On the bottom there a ribbon with two stars and the inscription, "50th Anniversary."

A few weeks after safely landing back on Earth, the Apollo 14 crew traveled to Washington, D.C., for a reception at the White House. Here is an excerpt of President Nixon's March 1, 1971 remarks.


"It is a great lesson for the American people. Exploration, of course, involves going to the unknown, not going to find something you know is there, or you think something is there. We remember, for example, that those who came to the New World were looking for a passage to India and they found the New World.

And as far as space is concerned, we think we know what we want to find and what we may find, but the more we explore we break into new vistas of knowledge.

That is why if this Nation is to remain a great nation, as it will remain a great nation, we must never accept the position that because we have, as we have, been first in going to the moon, because we have had great achievements in a field like this, that then we rest on our laurels, because the history of all civilization tells us that once a nation gives up or accepts passively the role of being second in exploring the unknown, that nation ceases to be a great nation.

And the Americans, this great American Nation with all of the strength and the intelligence and the drive and dynamism that we have, we must go to find it."


Our beautifully handcrafted ornament is packaged in an elegant showcase window box.

Proudly Made in USA