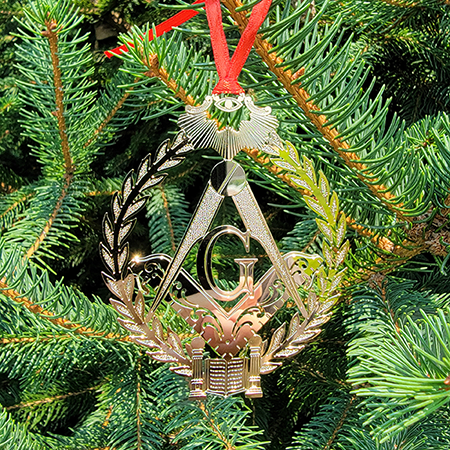 White House Christmas Ornament is proud to offer the George Washington Masonic Ornament honoring a distinguished Freemason who faithfully and valiantly served his country and elected to be the first Master of Alexandria Lodge No. 22. Several years after Washington's death there the name of lodge was changed to Alexandria Washington Lodge, No. 22.

"Know ye, that we, Edmund Randolph, Esq., Governor of the Commonwealth aforesaid and Grand Master of the Most ancient and honorable society of Free Masons, within the same by and with the consent of the Grand Lodge of Virginia, do hereby constitute and appoint our illustrious and well-beloved Brother George Washington, Esq., late General and Commander-in-Chief of the forces in the United States, etc."

Brother Washington once remarked, in an address delivered by him before the Grand Lodge of Virginia, that much as he admired Masonry it was only on the field of battle that he had really learned to love it. Wisely and truthfully were those words uttered. For it is there, amid loud hosannas to the god of slaughter, when "Men with rage and hate Make war upon their kind, And the land is fed by the blood they shed, In their lust for carnage blind," that the voice of Masonry speaks in tones that are heard above the dull booming of artillery, and the shrill blast of the bugle. It is there, when the utterance of humanity is hushed - when language, created by its beneficent author, to express man's wants and man's affections, is exchanged for the clashing of steel - when the plunge of the bayonet or the thrust of the saber is too often the only reply to the cry for mercy - and when human sympathy has been driven from its throne in the human heart - it is there that the whispered word may make its strong appeal, and the mute yet eloquent sign, will paralyze the uplifted arm, converting by its hidden necromancy, hate into love, and binding in a moment the conqueror and the conquered with these strong cords of fraternal affection which will withstand the utmost strain of national enmity to snap asunder.

This collectible is a reissue of the 1994 Mount Vernon Three Great Lights of Masonry Ornament. It features “G” at the center of the Masonic Square and Compass to represent God and Geometry. The masonic Eye of Providence stands at the top of the circular ornament.

Own a Moment of History. Order your ornament today.