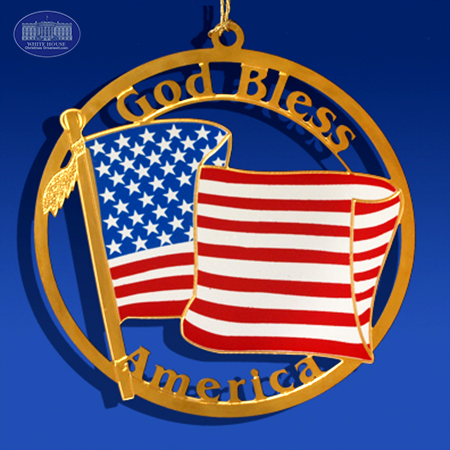 According to popular legend the first American flag was made by Betsy Ross.  It appears, however, that the true designer of the first flag was Francis Hopkinson, a NJ Congressman.  The Continental Congress approved the first official national flag (the Stars and Stripes or Old Glory) on June 14, 1777.  In 1818, Congress passed legislation which fixed the stripes of the flag at 13 (7 red and 6 white) and the number of stars to equal the number of states.

The thirteen stripes represent the original thirteen colonies and the colors symbolize special characteristics.  Red is for valor and hardiness, white represents innocence and purity and blue is for perseverance, vigilance and justice.

Show your patriotism with a God Bless America Flag Ornament on your Christmas tree.