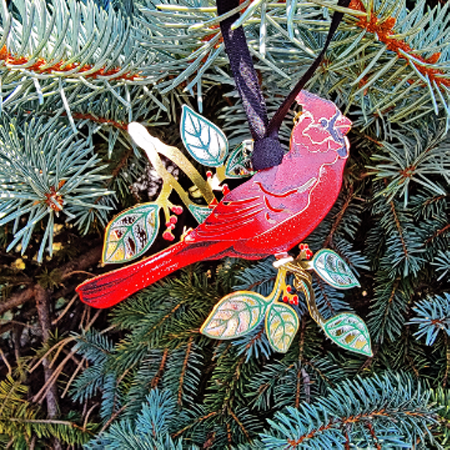 
This beautiful 24 karat gold ornament honors 26th president of the United States love of the natural world. He was known throughout the world as the "Great Conservationist." After becoming president in 1901, Roosevelt used his authority to protect wildlife and public lands by creating the United States Forest Service (USFS) and establishing 150 national forests, 51 federal bird reserves, 4 national game preserves, 5 national parks, and 18 national monuments.


Nothing pleased Theodore Roosevelt more than birds returning back to Washington. He wrote a letter to his children on being awakened in the morning by a cardinal singing merrily in a magnolia tree just out side his White House bedroom. Unlike many other species of birds, cardinals do not migrate during the cold winter months. Instead, they stick around and forage for wild berries, nuts and seeds. All while seeking shelter and security in evergreen trees, shrubs, and even overgrown thickets. There’s something stunning about a bright scarlet feathered cardinal against a winter snow backdrop. This ornament features our Christmas mascot perched on a holly branch with bright red winter berries.


Proudly hand made in the USA.