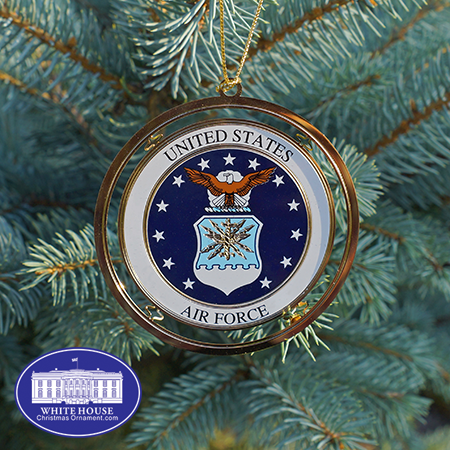 White House Christmas Ornament is proud to present our Official 24 karat gold plated Air Force Ornament. The center of the ornament features a Eagle with wings spread on a cloud. The Eagle is the symbol of the United States of America and is associated with with the Air Force striking power. The bald eagle's white head is turned to the right, which symbolizes facing the enemy and looking toward the future and not dwelling on past deeds. The Eagle is perched on the top of blue, white, and gold shield. The center of the shield represents heraldic thunderbolts striking from the air. The ultramarine blue and gold within the shield are the colors of the Air Force through transition from the Air Corps. The background is midnight blue with 13 stars encircling the eagle and shield, representing the Thirteen Original Colonies of the United States.


Proudly Made in the USA by a Military Family