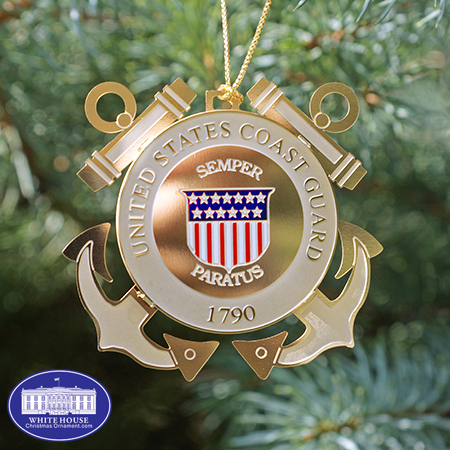 White House Christmas Ornament is proud to present our Official 24 karat gold plated United States Coast Guard Ornament. The holiday ornament features a pair of crossed anchors superimposed by a life ring with a shield in the center.


The shield is composed of red and white stripes, which represent the states united under and supporting the blue, which represent the President and Congress. 13 stars signify the original 13 colonies. Surrounding the shield are the words "SEMPER PARATUS" meaning Always Ready. Within the life ring are the words "UNITED STATES COAST GUARD" and the numbers "1790." The Coast Guard was founded on August 4, 1790 as our Nation's first armed force at sea until the the Navy was established on April 30, 1798. The two crossed anchors honor the "Boatswain's Mate" (also known as the Petty Officer) the most versatile member of the Coast Guard's operational team, and a master of seamanship.


This collectible ornament will treasured as a family keepsake.


Proudly manufactured in the United States by a military family