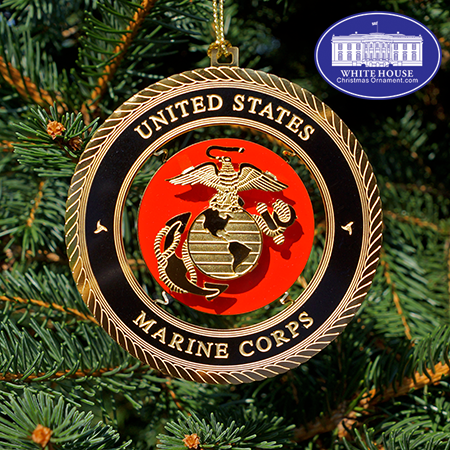 White House Christmas Ornament is proud to present our Official 24 karat gold plated Marine Corps Ornament. The center of the ornament features the Eagle, Globe, and Anchor Marine Corps Emblem. The Eagle is the symbol of the United States of America and is associated with with the Marine Corps. The Eagle proudly hold in its beak a streaming ribbon stating the motto of the Corps: Siemper Fidelis (always faithful or always loyal). The Eagle is perched on the top of the western hemisphere the Globe of our planet Earth. The Globe represent the Marin Corps the worldwide commitment of the Marine Corps and its areas of responsibility. Below the Globe, The fouled Anchor and Rope, whose origin dates back to the founding of the Marine Corps in 1775, represents the Marine Corps naval tradition.


The emblem is displayed on a scarlet red enameled background which Marines killed in action. The black enameled outer ring with gold lettering stating "UNITED STATES MARINE CORPS." A nautical rope surrounds the edge of the beautiful commemorative ornament.


Proudly Made in the USA by a Military Family